The adventures of the beautiful traveling teacup started with the idea to gift a friend a beautiful teacup.

It was the friend’s intention that the teacup would travel to another friend. You could hold a virtual tea party. With all of the social distancing, this traveling teacup could bring about joy.

This darling teacup, Tessa Rose and belongs to Barbara at Mantle and Table. I had heard about this sweet traveling teacup from a friend and reached out to Barbara about Tessa Rose visiting Maryland.

To my delight a box arrived with the lovely Tessa Rose ready for a new adventure! My plan is to take her to visit the first city of Maryland, the historical St. Mary’s City.

There an abundance of history in Maryland. Historical St. Mary’s City was Maryland’s first European settlement and capital. A former colonial town, the city was founded in 1634. The Maryland colony was founded as a place where English Catholics could escape religious persecution.

The original settlement was the fourth oldest permanent English settlement in the United States. The settlers arrived in Maryland on the Dove.

Today, St. Mary’s College sits in the heart of St. Mary’s City and half of the area is occupied by the campus of the college.

Here Tess Rose is sitting on the dock over looking the beautiful St. Mary’s River. I captured the tranquil sound of the river for you to enjoy. St. Mary’s City is bordered by the St. Mary’s River. It is a short, brackish water tidal tributary of the of the known Potomac River where it empties into the Chesapeake Bay. This river has influenced the lives of people who have traveled on it for hundreds of years.

Along the shoreline is home to birds, wildlife and native plants found in Southern Maryland.

I wanted to take Tessa Rose to see the first Maryland State House 1934 that was reconstructed. Unfortunately, photography was not allowed.

The building seen here was constructed in the late 1600s for brewing and baking. Garrett Van Sweringen wanted to meet the growing demands for beer and bread from passing ships. You can see the brick open fire place used for cooking.

Trade was big along the waterways in Southern Maryland. Tobacco proved to be incredibly profitable for the colony. The first European settlers of the region saw the profitability in raising tobacco. Crops of tobacco were very profitable that laws were passed to ensure that not all of the land went for producing tobacco. Two acres of corn was to be planted for each man working in the tobacco fields.

For nearly 370 years, tobacco had been a crop in Southern Maryland. My mother grew up on a tobacco farm. Today, tobacco is a dying industry. The local farmers and Amish in the community have change to other produces in lieu of tobacco. Many local and Amish farmers and Amish took the tobacco buyout program offered by Governor Parris Glendening back in 2000. It paid farmers to quit growing tobacco.

First Maryland Snow of this season

Tessa Rose got to experience Maryland’s first snow of the season. It was a sizable snowfall too!

She felt the beautiful icy snowflakes hit against her delicate china. It was a beautiful cold and mildly windy day.

Southern Maryland in our area received 9 inches of snow. Don’t the trees look beautiful? Some of the surrounding areas were left without power for several days from this snow and ice storm. We had what was called Thunder Snow. It is when you hear it thunder when it snows. Thankfully, Tessa Rose was warm and cozy inside with heat and electricity.

After the snow melted and the household virus fade. Tessa Rose was safely package up and delivered to the local Post Office. She began her journey home back to Portland, OR.

Thank you to Barbara at Mantle and Table for allowing Tessa Rose to visit the charming Southern Maryland.

You can read more about The Traveling Teacup here on Mantles and Tables.

I have a lovely collection of teapots and teacups. Most of my items are English and French china except for my my Moss Rose collection. My mother gave my my first tea set (Moss Rose) on my 30th birthday.

Over the years, my mother and I love to have tea together. We have had tea at various locations in DC, Maryland and Virginia.

For my mother’s birthday, I did a tea party for just the two of us. With COVID, we had been keeping our circles very small. You can read about our fun little tea party for two here.

Some of the links in this post are affiliate links, meaning, at no additional cost to you, I will earn a small commission if you click through and make a purchase. The opinions are always my own. It helps me to continue to bring to you new content, DIY and projects tutorials on my blog. It cost money to maintain a blog.

Wouldn’t you love to create your own tiered plate stand. It is simple do and I can show you how. Click on the link below.

Check out some of my Recent Projects & Home Tour

Have an amazing day, sweet friend! 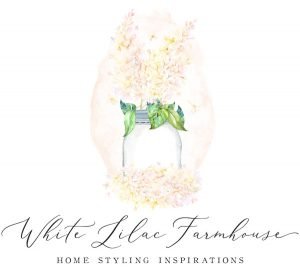 Thank you for stopping over at my blog at White Lilac Farmhouse. Hi, I am Tammy. A mother of four grown children, Nana to four amazing grandchildren, wife, and Mama to funny little fur babies, Chloe the Boston Terrier and Piper the French Bulldog. The girls as I call them are often in my photos as they are my little shadows.